Giorgio Chiellini is expected back at the Continassa tomorrow to join up with the Juventus squad for training tomorrow, and could also sign his new deal. 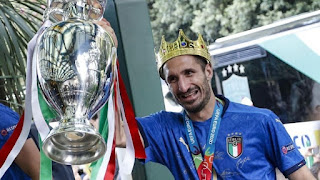 The club and international captain has enjoyed an amazing summer of football, leading Italy to Euro 2020 glory with a number of exceptional performances, keeping his team focused on the job in hand, and he is expected to return to the Allianz Stadium for another season.

The 36 year-old’s previous contract ended a month ago, and he could have talked to clubs over a potential new destination for the upcoming campaign, but he only had intentions to stay with Juve, and there isn’t expected to be any issues in signing a new deal, which Il Messaggero(via TuttoJuve claims could be wrapped up as early as tomorrow when he reports for training.

Fingers crossed he can stay fit for the upcoming campaign, having missed a large chunk of the previous term with injuries, which no doubt had a knock-on effect on our finishing league position, with Danilo even being forced to fill in at centre-back.

He and Bonucci proved this summer exactly why there remain an important cog in defence, and they are well-deserved of the praise they received for their European Championship campaign.

Could not authenticate you.